Town Board to Host "On-the-Run" Meeting at Mount Gulian

​Town Supervisor Ozzy Albra and the Town Board will hold a unique “On-the-Run” meeting on June 16, 2021 at 7pm at the Mount Gulian Historic Site on Sterling Street. This meeting will be a full Town Board meeting identical those held at Town Hall, including multiple opportunities for residents to speak to the Board about Town matters.

“We’ve created the most transparent government in the history of the Town of Fishkill,” Albra said. “In the past year-and-a-half, we’ve taken the power away from developers and given it back to the citizens.”

The current Town Board, comprising Supervisor Albra and Councilmembers Jacqueline Bardini, Ori Brachfeld, Louise Daniele and Kenya Gadsden, has adopted several items of legislation aimed at creating and maintaining a transparent, accessible system where residents’ voices are heard and civic-minded citizens are invited to be part of the process. 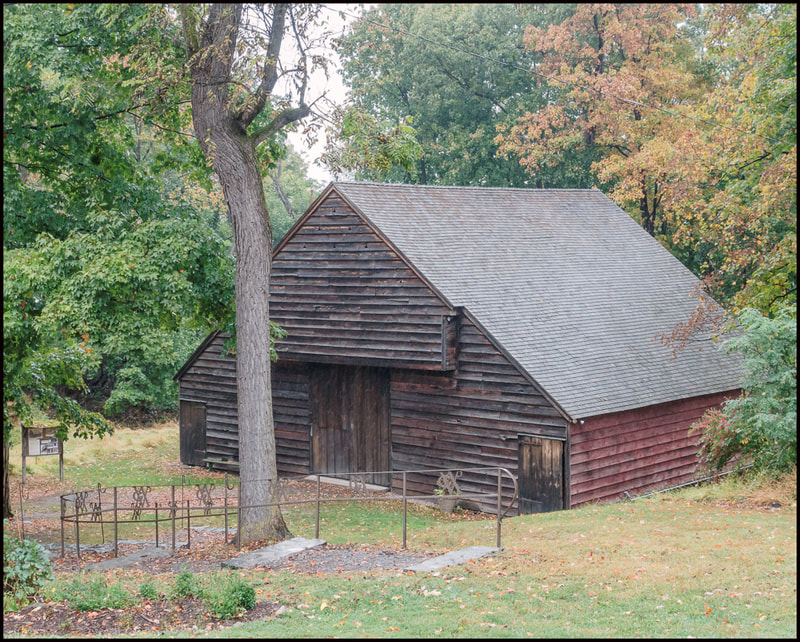 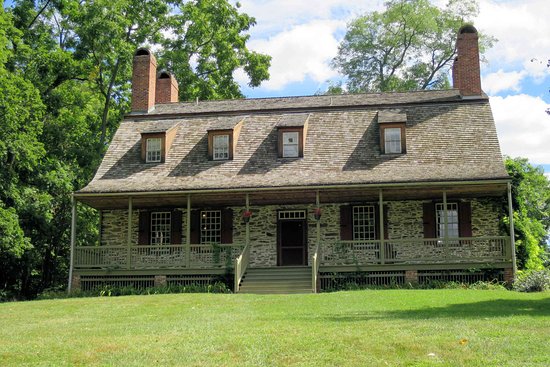 ​Supervisor Albra’s administration has constantly been striving to make voices heard. Beginning with the very first regular meeting of the Town Board, Supervisor Albra changed the structure of Town Board meetings to permit residents to address the Board at the beginning of the meeting, breaking from the previous administration’s procedure which often required residents to wait through two to three hours of Board discussion before being permitted to speak.

Within three months of taking office, the Town Board unanimously voted to keep Supervisor Albra’s campaign promise to enact a law establishing term limits, limiting the Town Supervisor and Town Councilmembers to serve no more than two four-year terms. Of the more than 900 towns in New York, fewer than 10 have similar term limit laws, and none are as strict as the Town of Fishkill’s.

Supervisor Albra also gave Town Board members freedom to communicate with Town staff as well as the Town attorney and engineer and to request information at any time, a break from the previous administration.
“As Supervisor, I want to work with a Town Board that is engaged, informed and ready to get to work,” Albra said. “The Councilmembers are free to come and go as they please and to ask any questions at any time, which did not happen previously.”

Other modifications in Town Hall included the installation of safety glass at every service window at Town Hall, an action taken by the Town Board to enable Fishkill to be the only municipality in Dutchess County to remain open and serving the public throughout the entirety of the COVID-19 pandemic.

“The citizens of the Town of Fishkill have a right to voice their opinions and be a part of the process when their quality of life is at stake,” Albra said.

Supervisor Albra and the Town Board have likewise moved to improve the publication of Public Hearings, by extending the guidelines for public notice to the Town Board. These guidelines had previously only existed to govern the Planning Board.

Throughout his administration, Supervisor Albra has prioritized improving and revamping the Town Code to make the Town’s laws straightforward and easy to understand. For months, Supervisor Albra has consulted with the Town Building Inspector, Planning Board, Zoning Board of Appeals, the Town engineer and the Town Attorney to update Chapters 150 and 132 of the Town Code, which relate to Zoning and the Subdivision of Land.

“We’re talking about two very important sections of code which are also very technical and can be difficult to understand,” Albra said. “These revisions are removing a lot of ambiguity and streamlining the process so residents can both understand the regulations and navigate them more easily.” 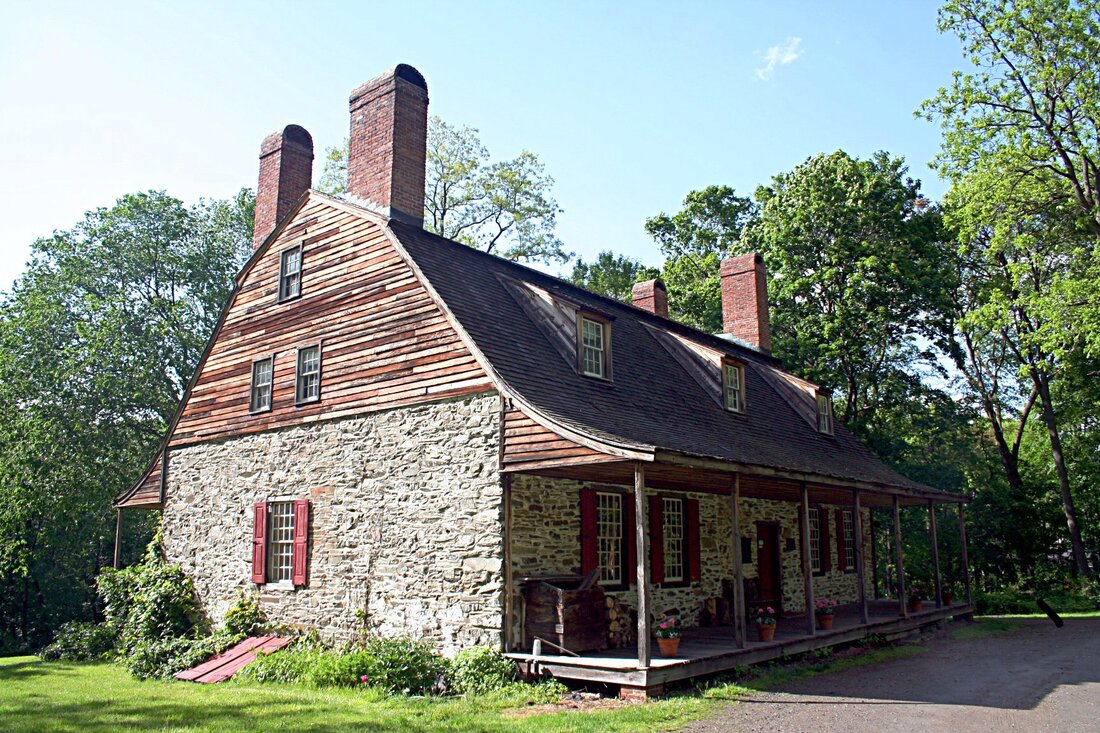 The Town Board held a Public Hearing on the revisions to Chapters 150 and 132 at the May 5, 2021 Town Board meeting. To encourage further public comment, the Board continued that public hearing to Wednesday’s meeting at Mount Gulian. Residents can review the proposed changes on the Town website at www.fishkill-ny.gov and will be allowed to offer their opinions or ask any questions at the Public Hearing on Wednesday.

The Mount Gulian Historic site is located at 145 Sterling Street. Signs posted by the Town along Route 9D will guide residents to the site, which was the location of General Friedrich von Steuben’s headquarters during the American Revolution, where he played a pivotal role in assisting George Washington and the Continental Army in their victory over the British. For more information about the historic site, which is one of Fishkill’s numerous historical resources, visit https://www.mountgulian.org

​Monday was a day full of solemn remembrance as the Town of Fishkill observed Memorial Day. The day began with a wreath-laying at the Town War Memorial Park, attended by Supervisor Ozzy Albra, Councilwomen Jackie Bardini, Kenya Gadsden and Louise Daniele, Town Clerk Rebecca Tompkins and Police Commissioner Dennis Zack. A wreath was given to the Town for the occasion by the Verplanck Garden Club, and the wreath was placed by Councilwoman Daniele's son Charlie, in remembrance of all Fishkill's heroes who have given their lives in service of our nation. 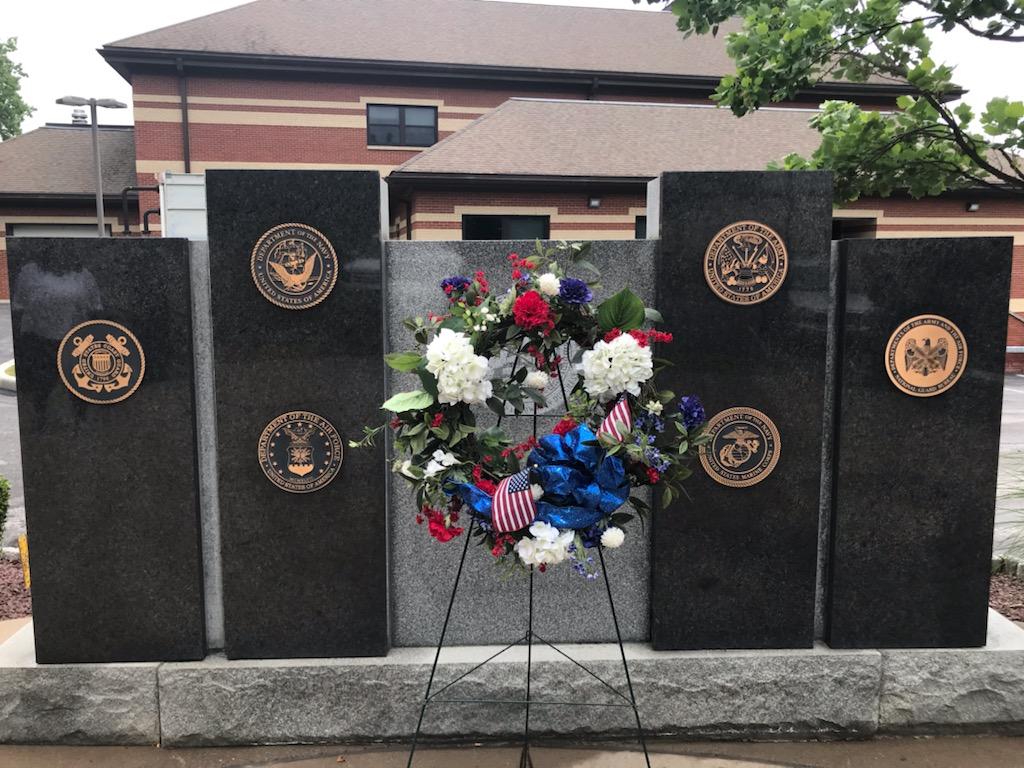 Town officials then went to the Fishkill Rural Cemetery for a Memorial Day Ceremony, capped with a stirring graveside dedication at the grave of Civil War veteran and Medal of Honor recipient Sgt. Elijah A. Briggs, 2nd Connecticut Heavy Artillery. Supervisor Albra spoke about Sgt. Briggs and his regiment, and their remarkable journey from guard duty at forts near Washington DC to storming Confederate trenches in some of the Civil War's deadliest battles, including Cold Harbor and Petersburg. Sgt. Briggs earned the Medal of Honor for his actions on April 6, 1865 when he captured a Confederate battle flag at Petersburg. He settled in Fishkill after the war, and lived to the age of 78 before passing away in 1922.

Keynote remarks were given by DAR General President Denise Van Buren, who offered a stirring tribute to Congressman Hamilton Fish, who was the driving force behind the creation of the Tomb of the Unknown Soldier, which was erected at Arlington National Cemetery 100 years ago. A graveside ceremony at Sgt. Briggs' grave brought proceedings to an end at the cemetery. 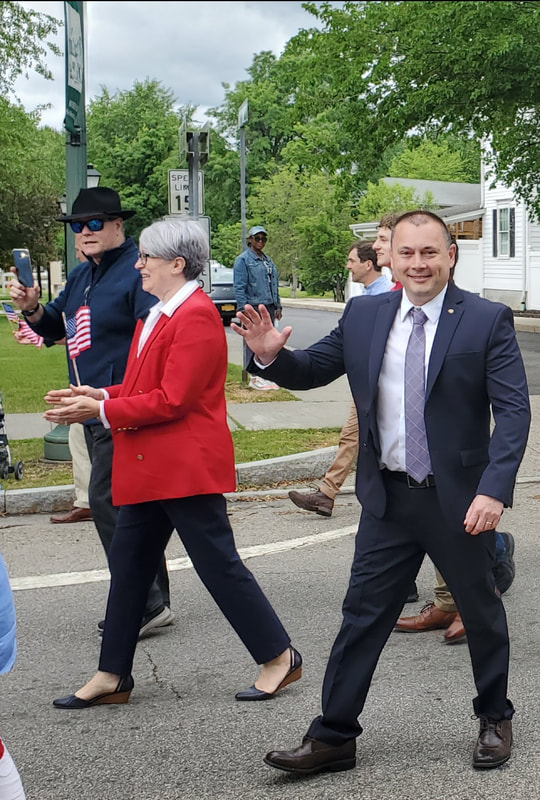 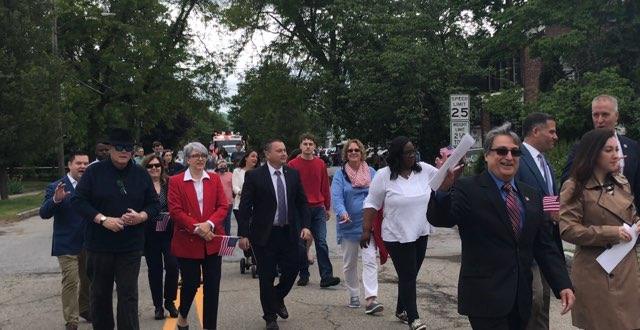 The day ended in spirited fashion as Town officials joined other dignitaries, including Village of Fishkill Mayor Jim Miccio, County Legislator Doug McHoul, County Executive Marcus Molinaro and Congressman Sean Patrick Maloney for a parade through the streets of the village, followed by a ceremony at the Village War Memorial.
Supervisor Albra wishes to thank all the Town officials and dignitaries who attended Monday's events, the Fishkill Rural Cemetery Board of Trustees and President Sterling Gaston, Denise Van Buren, Mayor Jim Miccio, and the Town of Fishkill Police Department for providing a color guard for Monday's ceremonies. 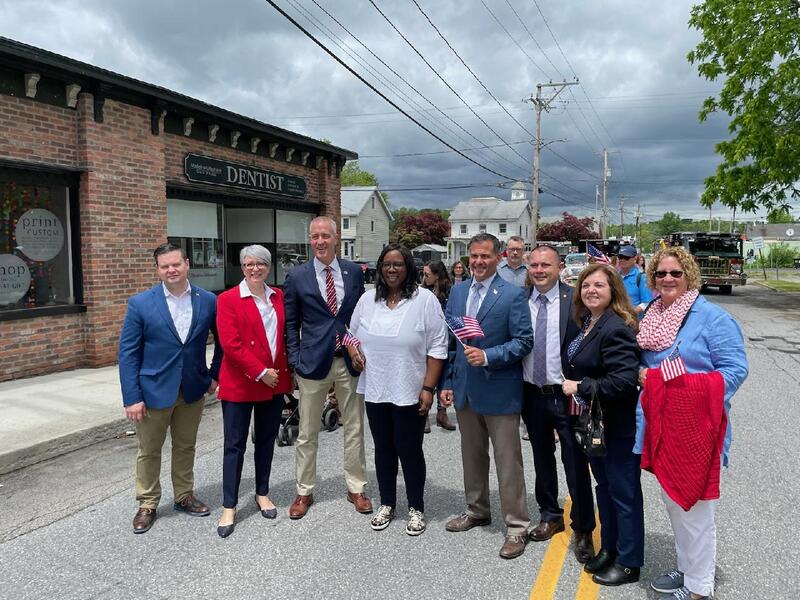 Supervisor Ozzy Albra and other dignitaries met Thursday to officially welcome Tesla to the Town of Fishkill at the ribbon-cutting of the new Tesla Supercharger station at 18 Westage Drive.

“I’m proud to welcome Tesla to Fishkill, and I congratulate them on this occasion,” Albra said before cutting a ribbon fashioned to a Tesla vehicle, officially opening the charging site.

The Tesla Supercharger station features 12 Tesla Supercharger units which run on V3 technology, and can supply Tesla vehicles with power for up to 180 miles of driving range in only 15 minutes. An additional generic charging unit at the station can accommodate other electric car models. This accommodation was done free-of-charge by Tesla at the request of Supervisor Albra.

Tesla rep Shiva Krishna brought a Tesla Model Y to the station to demonstrate the vehicle’s features and the capabilities of Tesla’s Supercharger unit. Krishna explained what separates a Supercharger unit from other electric vehicle charging units.

“The difference is that the Supercharger can fully charge a vehicle in 25 minutes,” Krishna said.

Albra said Tesla’s arrival in Fishkill is in keeping with his ambitions for the Town.

“As Town Supervisor, I’ve prioritized making Fishkill an example of being on the cutting edge, and Fishkill is moving to the front and taking a leadership role here in our area,” Albra said. “Tesla is a company that’s also on the cutting edge, with their space program and innovations in green technology through electric cars that are changing the game. This represents the future.”

David Livshin is the President and CEO of the Dagar Group, which manages the Hudson Valley Towne Center at 18 Westage Drive. Livshin said the station promises to be a boon for businesses in the area.

We were very pleased to have the ribbon cutting of the Tesla super charger and generic stations today, Livshin said. “We feel this location will attract more people to this Southern Dutchess location. I want to thank Tesla for sending up their representative and a Tesla for the event.” 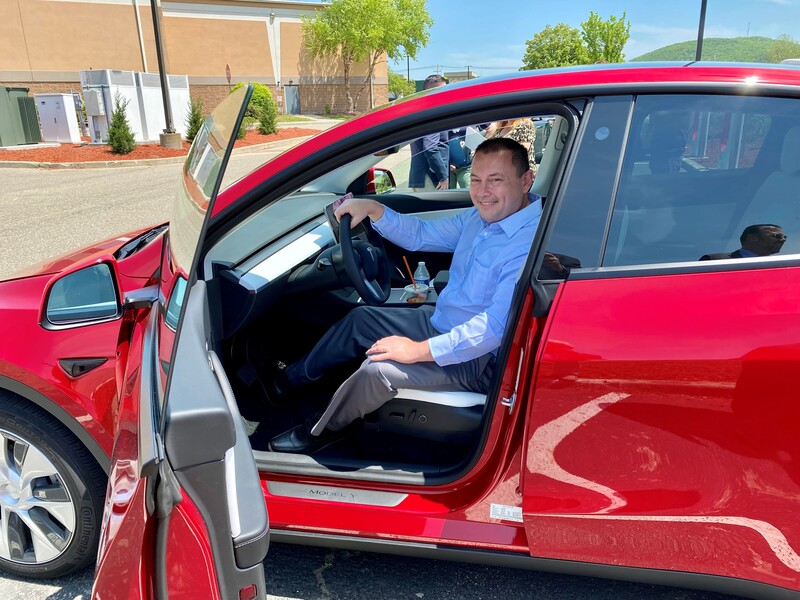 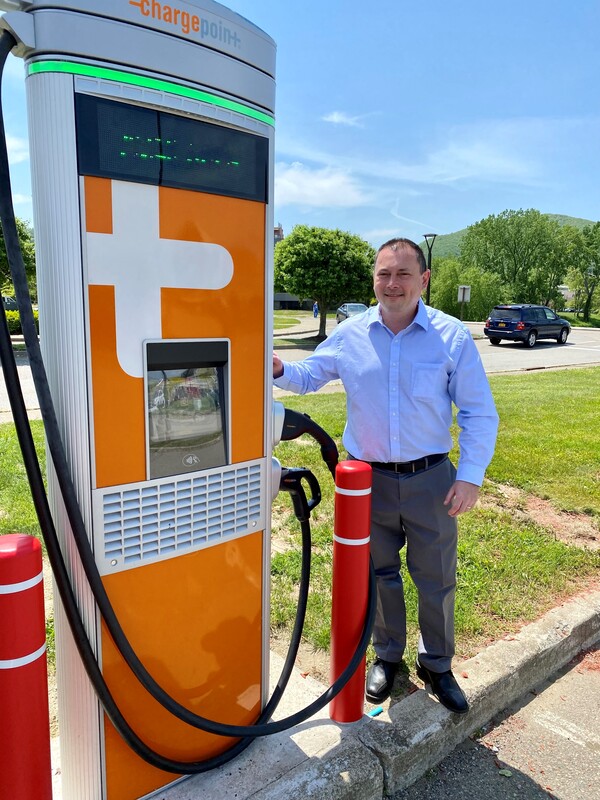 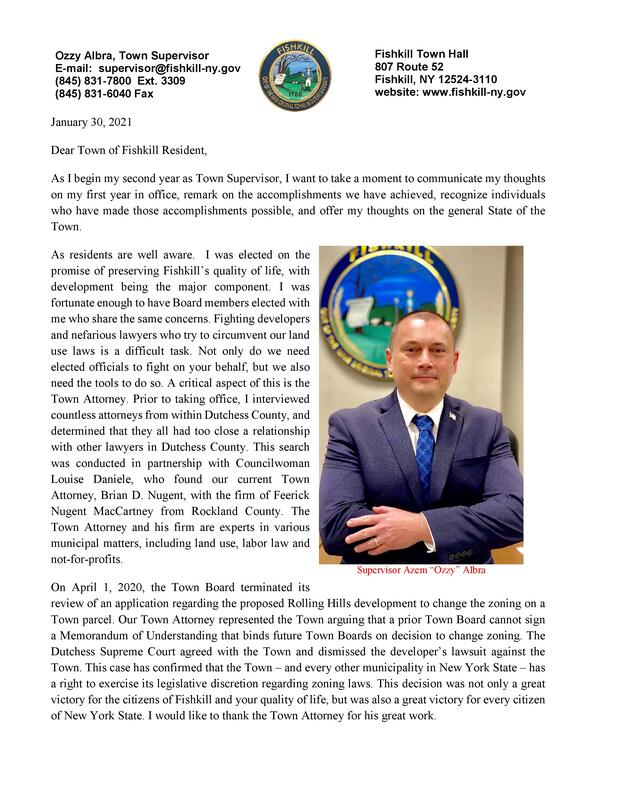 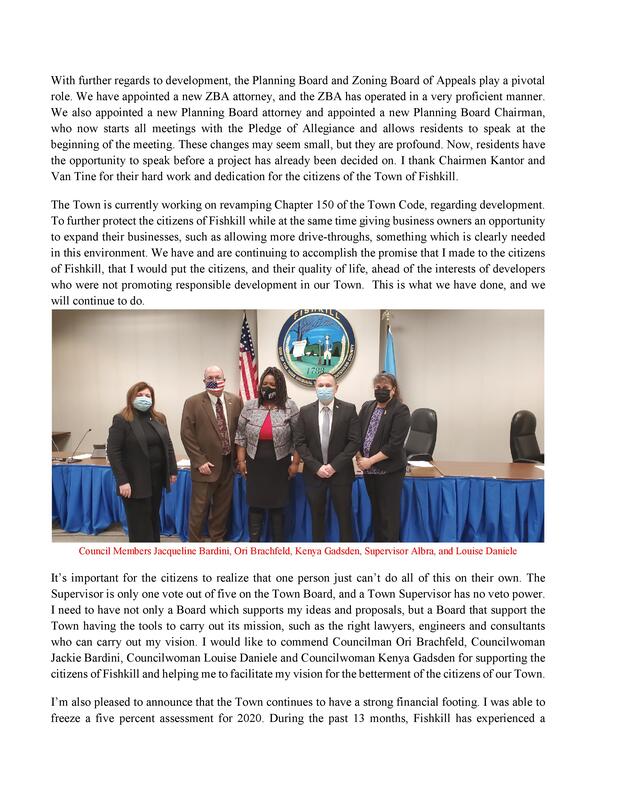 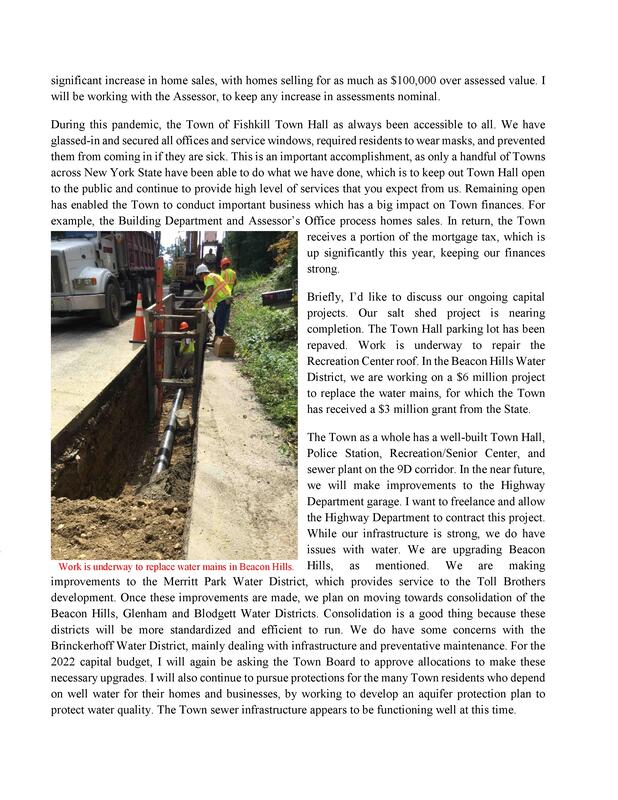 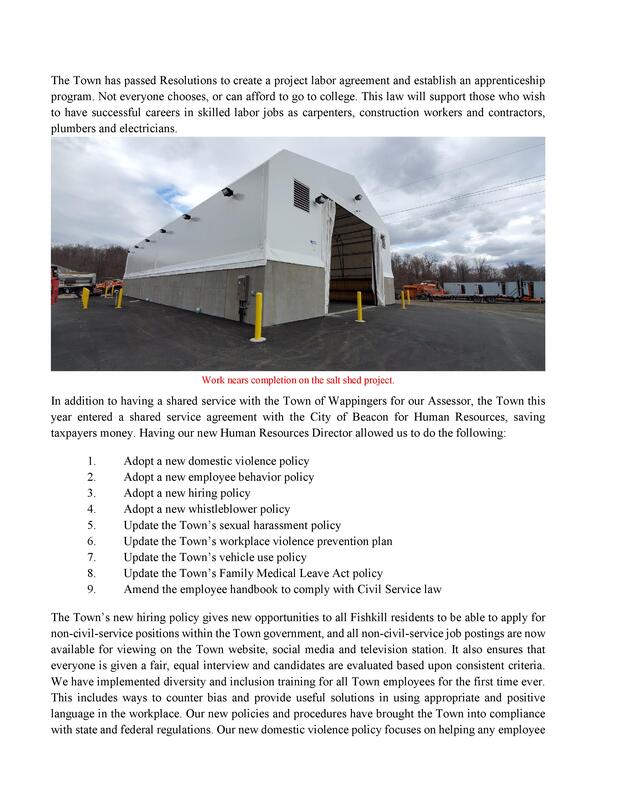 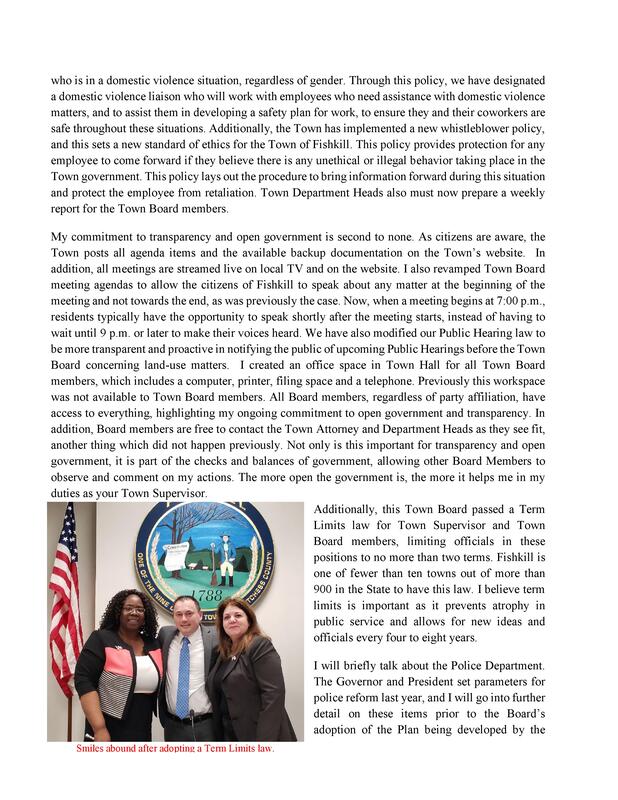 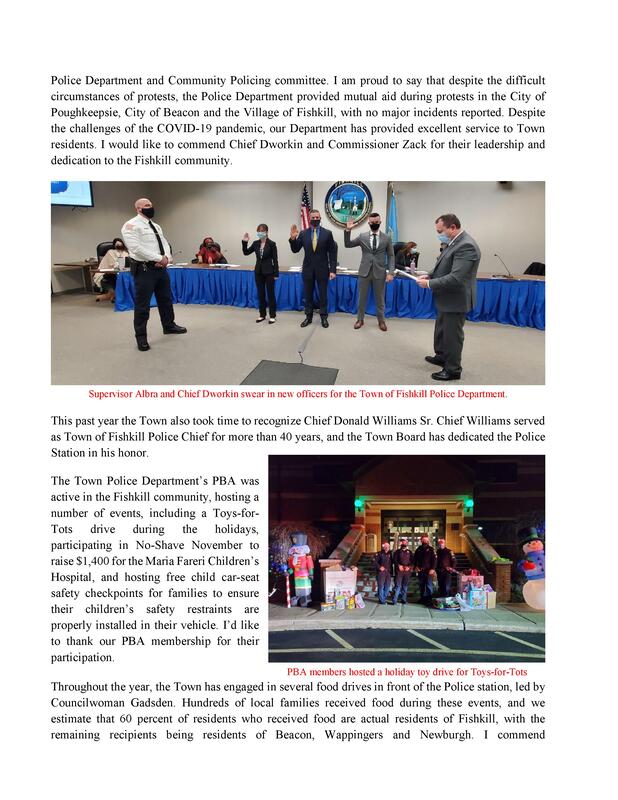 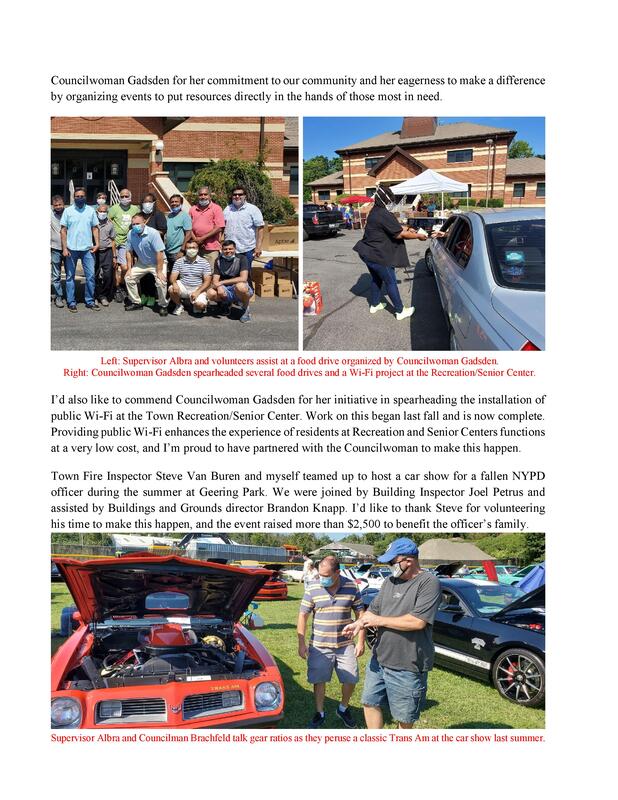 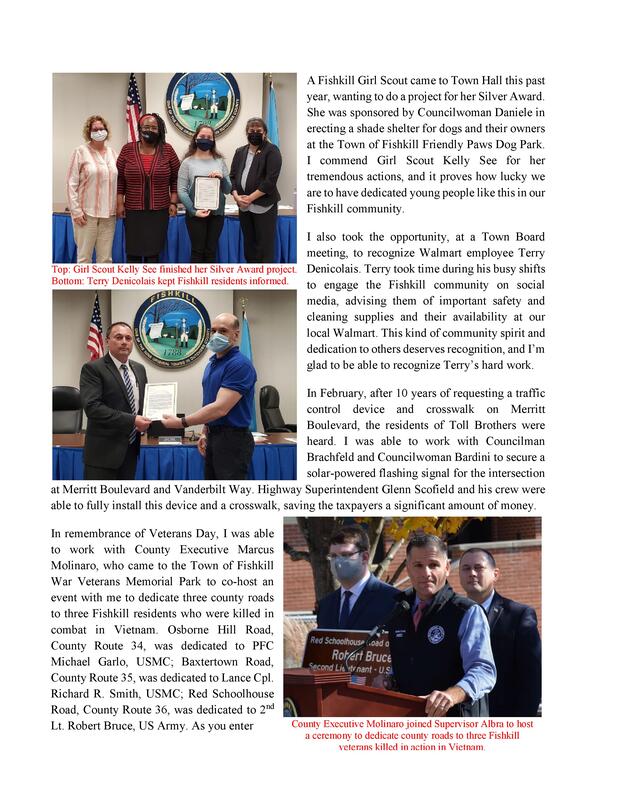 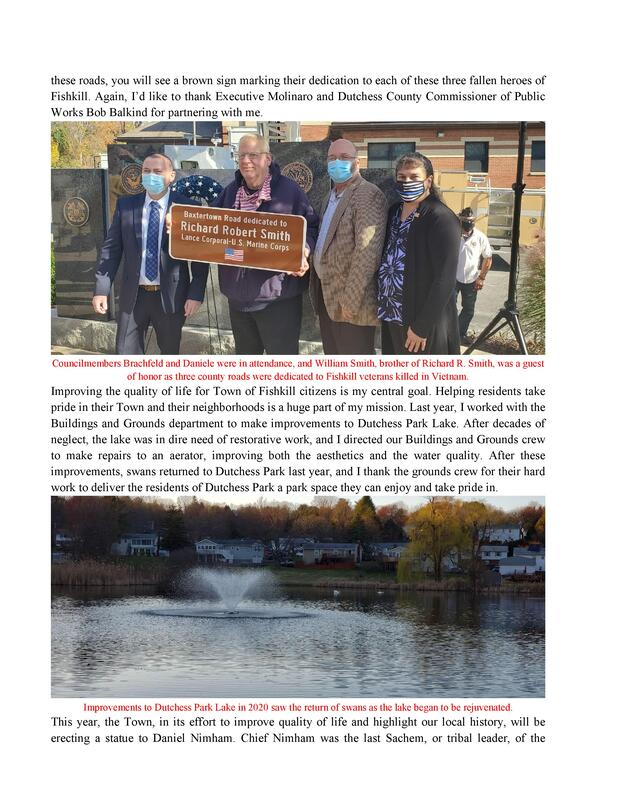 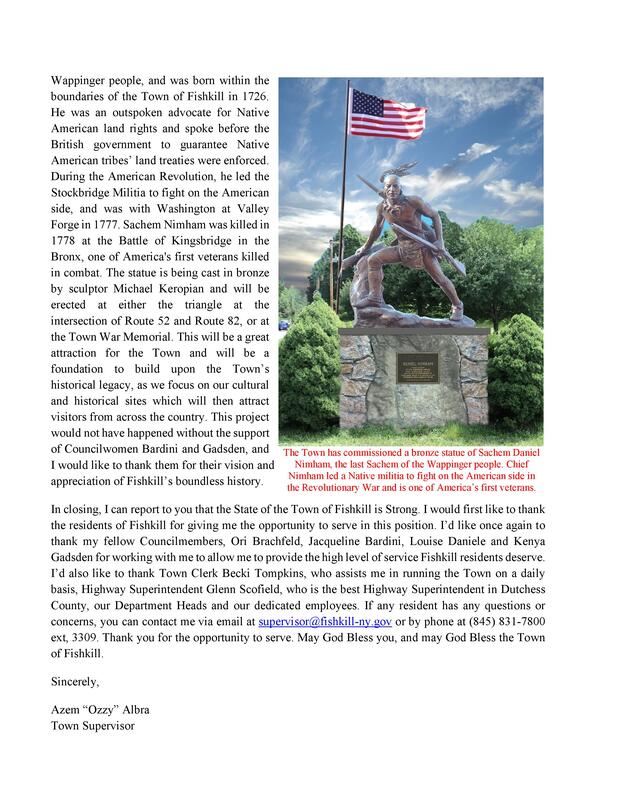 Supervisor Albra and the Town Board extended their congratulations and thanks to Fishkill Girl Scout Kelly See. Kelly recently completed work on a shade structure at the Town of Fishkill Friendly Paws Dog Park. This shade structure will keep our furry friends and their human companions cool from the heat and dry from the rain for years to come. The shade structure is Kelly's Girl Scout Silver Award project, and Kelly was presented with a Proclamation from the Town for her good work, presented by Town Clerk Rebecca Tompkins, Councilwoman Kenya Gadsden and Councilwoman Louise Daniele - all former Girl Scouts. 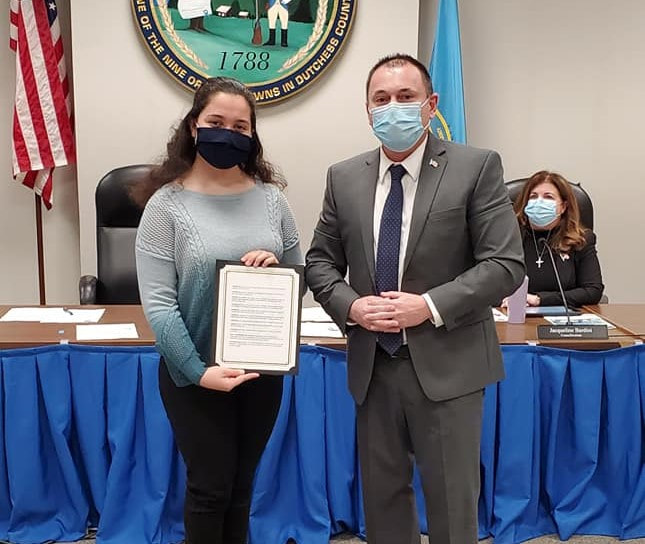